“Most innovative minds of our continent”: DPMA Vice-President congratulates winners of the European Inventor Award 2018 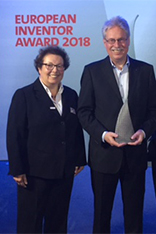 Paris. Christine Moosbauer, Vice-President of the German Patent and Trade Mark Office (DPMA), personally congratulated physical chemist Professor Jens Frahm in Paris on being awarded the European Inventor Award. “I congratulate Professor Jens Frahm on the high-ranking award and am very pleased for this outstanding researcher,” Christine Moosbauer said on the sidelines of the award ceremony in the French capital on Thursday, 7 June 2018. “Jens Frahm impressively shows how scientific research can lead to marketable products that not only create sales and jobs, but also improve people's lives.” Professor Frahm was recognised with the European Inventor Award in the category “Research”.

MRI: Flash shots from the Body

Professor Jens Frahm is head of the Biomedizinische NMR Forschungs GmbH at the Max Planck Institute for Biophysical Chemistry in Göttingen. The 67-year-old researcher revolutionised magnetic resonance imaging (MRI) with his method known as fast low angle shot (FLASH). Previously, it had taken several hours to capture MRI images – far too long for medical diagnostics. With FLASH this went 100 times as fast. In 1985, together with other researchers, Professor Frahm applied for his first patent for this invention at the DPMA. In 2010, he optimised the method again, with FLASH 2. “Professor Frahm's inventions have improved the treatment options for millions of people worldwide. We are delighted that along with Professor Frahm, a development has been honoured whose patent law foundations have been laid in our office.” 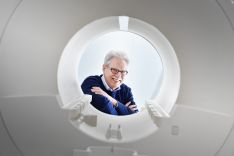 The DPMA Vice-President also congratulated the other winners on their awards. “The European Inventor Award brings together some of the most innovative minds of our continent and beyond. The proposed developments, but also the people behind them, never fail to fascinate.” The prize, which is annually awarded by the European Patent Office (EPO), honours personalities from science, research and development in five categories. This year, 15 inventors from 13 countries were nominated.