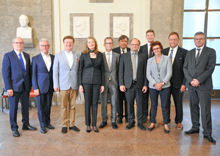 Nominees and organizers of the Deutscher Zukunftspreis award

Munich. A brand-new drug against life-threatening diseases, a fundamental redesign of a drive system and an innovative method to make better use of renewable energy: The three teams nominated for the Deutscher Zukunftspreis 2018 (German President's Award for Innovation in Science and Technology 2018) and their inventions were presented in Munich today. “The jury has nominated impressive personalities for the award. Their inventions cover a comprehensive spectrum and show how broadly Germany is positioned as a centre for innovation even at the very top,” Cornelia Rudloff-Schäffer, President of the German Patent and Trade Mark Office, stated. “I am particularly pleased that, in contrast to previous years, there is a woman among the nominees this year.”

The three final applicants were presented at a press conference at the Deutsches Museum:

Professor Helga Rübsamen-Schaeff and Dr Holger Zimmermann have developed Prevymis (letermovir), an innovative drug. It prevents infections caused by the dangerous cytomegalovirus (CMV) during stem cell transplants. This leads to such transplants being considerably safer, treatments becoming more promising and the lives of patients being better protected.

Dr-Ing E.h. Manfred Wittenstein and Dipl-Ing Thomas Bayer have developed the “Galaxie” Drive Systems, a new gear type for efficient and precise drives in high performance engineering. Innovative gear teeth provide for a surface for power transmission that is six times larger than that of conventional gears. This way, much higher torques can be achieved than before.

On 28 November in Berlin the jury will select the award winners from the three nominated teams, who will then be honoured by the German President.