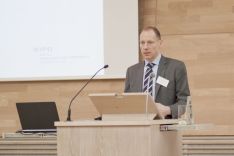 Munich. Global innovation trends, patents on autonomous driving, the forthcoming trade mark law reform with the certification mark: At the 2018 DPMAnutzerforum (user forum), the German Patent and Trade Mark Office (DPMA) once again provided information on the most important developments in innovation and intellectual property. "We always want to stay in tune with the times for our customers," said DPMA President Cornelia Rudloff-Schäffer, adding: "The great interest in the user forum shows us that we have chosen the right topics." This year's user forum attracted 150 people from patent and trade mark departments, law firms and institutions from all over Germany.

This year's highlight: Dr Carsten Fink, the Chief Economist of the World Intellectual Property Organization (WIPO), presented the "Global Innovation Index", published by the organisation once a year. According to this report, Germany has improved slightly in global innovation competition, but still has a considerable need for development in some areas. In other industrialised countries, the density of new companies is higher, furthermore it is also easier there to set up companies. According to the Innovation Index, the number of working women in Germany with a higher level of education is also still comparatively low by international standards. Germany's strengths lie in logistics, which is important for trade, investment in research and development and patent applications. Overall, our country ranks ninth among 127 national economies in the Global Index.

Will owners soon be picked up at the airport by their self-driving cars? Will drivers, in the future, be able to relax with a good book on the motorway? The focus of the 2018 user forum was on the future technology of autonomous driving alongside fundamental innovation trends. DPMA Vice-President Günther Schmitz weighed up the opportunities against the risks and outlined the rapid technical development. Last year, the DPMA received 2,633 patent applications on autonomous driving – 14% more than in 2016 and twice as many as five years ago. DPMA Vice-President Christine Moosbauer presented an overview of the strategy concept of the office.

A major focus of the DPMA strategy is on digitisation. With the comprehensive introduction of the new DPMAdirektPro digital service, which enables electronic delivery of documents while ensuring legal certainty, the Office has recently made crucial progress. Customers learned all the important facts about the new service in two workshops. In addition, new information from the four DPMA Directorates General and a report on current national and European legal issues from the Federal Ministry of Justice and Consumer Protection were also presented at the user forum.

Further Information abut the DPMAnutzerforum can be found on our website.

Inventiveness and creativity need effective protection. The DPMA is the German centre of expertise for all intellectual property rights – for patents, utility models, trade marks and registered designs. As the largest national patent office in Europe and the fifth largest national patent office in the world, it is committed to Germany’s future as a country of inventors in a globalised economy. Its roughly 2,600 staff based at three locations – Munich, Jena and Berlin – are service providers for inventors and companies. They implement the innovation strategies of the Federal administration and develop national, European and international IP systems further.