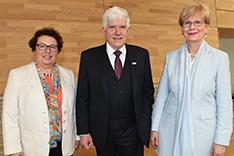 Munich. A farewell ceremony at the German Patent and Trade Mark Office (DPMA) in Munich marked the retirement of Vice-President Günther Schmitz and the induction into office of his successor, Christine Moosbauer. "Günther Schmitz with his great expertise and as manager of the authority was a major driving force behind many projects at the DPMA", said DPMA President Cornelia Rudloff-Schäffer. "Over the past eight years, we have jointly positioned the office as a modern service provider through the consistent change-over to digital IP case files, the strategic orientation and progressive working models. I would like to thank Mr Schmitz very much for his immense contribution and support." Christine Moosbauer as Vice-President would now continue the successful work, said the DPMA President. "With her many years of leadership experience and her extensive IT expertise, Christine Moosbauer is ideally qualified to lead our office into the future."

Today’s (18 April) ceremony at the DPMA headquarters on Zweibrückenstraße in Munich was attended by a large number of staff of the office and about 150 invited guests, including a representative of the Federal Ministry of Justice and Consumer Protection. 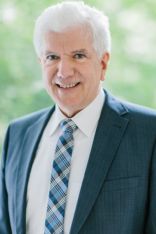 Günther Schmitz, 65, was born in Nuremberg and lives in Landsberg am Lech. He studied Mechanical Engineering and Aerospace Engineering at the universities of the Bundeswehr (German armed forces) in Hamburg and Munich. Subsequently, he completed officer training in the Bundeswehr and became a helicopter pilot. In 1987, with a degree in engineering, he joined the DPMA, initially as a patent examiner. In early 2001, Schmitz transferred to the Federal Patent Court where he was a technical judge for almost four years before returning to the DPMA at the end of 2004. He initially headed a patent division and then became Head of Department "Patents". In 2010, he was appointed Vice-President. During his term of office, Schmitz played a key role in developing the office’s strategic concept and, together with President Cornelia Rudloff-Schäffer, pushed ahead with the digitisation of the office. The expansion of the teleworking scheme and the establishment of flexible working time models enabling DPMA staff to balance work and personal life was also a matter close to his heart. He also initiated and supported the introduction of the central Customer Care and Services with integrated complaints management to ease the workload of the IP divisions. 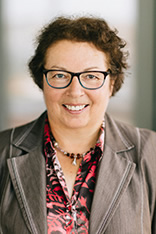 Christine Moosbauer, 61, was born near Passau and lives on the shores of Lake Chiemsee. She studied Communications Engineering at the Technische Universität München. After nine years in industry (medical engineering), she joined the DPMA in 1992 - initially as Deputy Head of section. Later Moosbauer became a patent examiner and then the Head of the office’s patent administration. She first headed the IT planning division, then a patent division, before taking over as Head of the Directorate General "Information" in 2015. Since the end of September 2017, she has been entrusted with the duties of Vice-President. A focus of her work will be on the further digitisation of the office's work and the expansion of business process management. Following the introduction of the electronic case file, the DPMA intends to further strengthen its pioneering role in e-government also through increasing digitisation of internal administration.

Inventiveness and creativity need effective protection. The DPMA is the national centre of expertise for all intellectual property rights - for patents, utility models, trade marks and registered designs. As the largest national patent office in Europe and the fifth largest national patent office in the world, it is committed to Germany’s future as a country of inventors in a globalised economy. Its staff of over 2,600 based at three locations – Munich, Jena and Berlin – are service providers for inventors and companies. They implement the federal innovation strategies and develop national, European and international IP systems further.