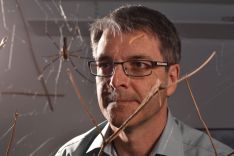 The President of the German Patent and Trade Mark Office (DPMA), Cornelia Rudloff-Schäffer, has responded joyfully to the nomination of biochemist Professor Dr Thomas Scheibel as finalist for the European Inventor Award 2018. "With his spider silk proteins, Professor Thomas Scheibel harnesses what nature has to offer and provides industry with a tremendously valuable new material. For years, we at the DPMA have considered his developments to be prize-worthy." The DPMA had already submitted Professor Dr Thomas Scheibel for nomination for the European Inventor Awards 2016 and 2017. "I am very pleased that Professor Scheibel is now among the finalists and wish him much success in the competition," said Cornelia Rudloff-Schäffer. The scientist and inventor has been nominated in the category "Small and medium-sized Enterprises" (SMEs).

Professor Dr Thomas Scheibel is a professor at the University of Bayreuth conducting research on biomaterials. From 2004, the researcher - at that time still at the Technical University of Munich - applied for several patents for the artificial production of spider silk proteins and later co-founded AMSilk GmbH, which is now based in Planegg near Munich. The company was the first company in the world to succeed in artificially producing spider silk proteins on an industrial scale, thus making them commercially viable. Spider silk is one of the most tear-resistant materials known, stronger than steel, and at the same time completely biodegradable. The proteins can be used for many diverse applications because they are also resistant to pathogens and promote wound healing. Therefore, the material is equally suitable for the textile industry, the production of cosmetics or medicine.

There are already several examples of use: The sports goods manufacturer Adidas has produced a shoe with an upper made entirely of spider silk fibre. AMSilk has also developed a process to coat breast implants with spider silk to avoid rejection by the body. In addition, the company’s findings have shown that the material is suitable for restoring heart tissue after a heart attack.

The European Inventor Award is conferred in five categories once a year by the European Patent Office for outstanding inventors. The nominated finalists have been presented today. The award winners will be honoured at a prize-giving ceremony in Paris on 7 June.

Inventiveness and creativity need effective protection. The DPMA is the German centre of expertise for all intellectual property rights – for patents, utility models, trade marks and registered designs. As the largest national patent office in Europe and the fifth largest national patent office in the world, it is committed to Germany’s future as a country of inventors in a globalised economy. Its roughly 2,600 staff based at three locations – Munich, Jena and Berlin – are service providers for inventors and companies. They implement the innovation strategies of the Federal administration and develop national, European and international IP systems further.