High tech in the studded boot, smart balls – and one day perhaps drones as assistant referees? Modern football is using increasingly sophisticated technical aids. Countless new inventions are being filed with patent offices every year. Some of them are picked up by manufacturers and associations, other ideas seem bold or bizarre and may perhaps never be implemented. On the occasion of the 2018 FIFA World Cup in Russia, the German Patent and Trade Mark Office has compiled a collection of inventions from all over the world on its website under the title "Football and Technology" – from the first balls and boots with screw-in studs to goal frames to goal line technology and video evidence. The online gallery is based on a database first published for the 2006 FIFA World Cup. Updated and revised, it covers the technological history of football with explanations, comments and links to electronic patent documents – and gives an outlook on what might come next. Visit our gallery and delve into the technical history of football. 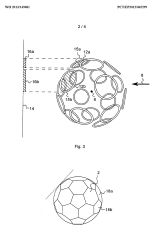 Balls, goals, footwear, monitoring the rules – the gallery is divided into different chapters. Currently, the main focus of activity of inventors is not on the development of new balls or goals, but on the collection and analysis of biometric data to improve performance. Every movement, every part of the body is to be monitored by sensors – attached to, for example, the shin guard or a hip belt – in order to develop suggestions for improvement and optimise the training later on. Some of these inventions also aim at reproducing professional football in computer games with the greatest possible level of detail, using electronic data.

There is also a lot on offer on the pitch: Today, what is known as hybrid turf has become an indispensable feature of numerous football stadiums around the world. It is designed to combine the robust properties of artificial turf with the good playability of natural grass. Interesting inventions on the subject can also be found in our gallery. As far as boots are concerned, the manufacturers seem to compete for optimum support and the best wearing comfort anyway.

However, inventiveness does not stop with football players and their equipment. There are also ideas for surveilling the referee: According to a US patent application, “gaze data” are to be captured and analysed in order to determine the accuracy of decisions. It could also be used to assess the likelihood of the referee being biased. And a German application even aims to improve security in the stadium through "emotion-based access control" by determining the "current emotional state" of the fans before admission to the stadium.

And there are also current ideas on the latest field of football technology, the video evidence. An application suggests that, in future, the referee should not communicate, for example, with a video assistant to review a decision. Instead, a drone should be sent directly through the stadium to directly replay the pictures to the man with the whistle.