Geneva. In 2019, the World Intellectual Property Organization (WIPO) has once again recorded rising application figures for patents, trademarks and designs. The number of patent applications rose by 5.2 per cent year-on-year to a total of 265 800. 64 400 trademark applications (+ 5.7 per cent) and 21 807 design applications (+ 10.4 per cent) were also received by WIPO. 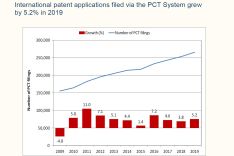 With reference to the current corona crisis, WIPO Director General Francis Gurry said that the expected recession of the world economy would probably also have an impact on international property right applications. Declining figures are expected for trademarks in particular. The extent of the recession and the resulting decline could not yet be foreseen.

Further information is available on the WIPO