Moving into the digital age

Ten years ago, a new era began at the German Patent and Trade Mark Office: On 1 June 2011, the electronic IP case file for patents and utility models was launched. From then on, we have used end-to-end electronic processing for patent and utility model applications, from receipt at the DPMA to publication. And what nobody could have known at that time: During the coronavirus pandemic, most DPMA staff are now able to work from home. On the one hand, the DPMA thus contributes to containing the spread of infections; on the other hand, despite or precisely because of the staff working from home, the office has been fully operational even in these times. 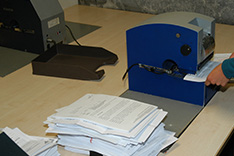 documents were perforated with date of receipt

Before the electronic case IP file was launched, the DPMA received about 300 new patent applications and a large number of other documents by mail and fax every working day. The patent administration staff had to be present at the office to handle this "flood of paper", to prepare official communications and to update the processing statuses in the central administration computer (ZVR). Even the documents received electronically were printed out in the document receiving section and forwarded in paper format to the patent administration.

Since the 1980s, the DPMA had been working with the ZVR computer system (central administration computer), which was based on the Cobol programming language and managed the essential procedural data. As early as the mid-1990s the DPMA decided to use a workflow system as the successor system, when it became clear that at some point it would no longer be possible to keep the administrative data in this way and that the support costs were increasing year after year. This required some preparation: The DPMA together with IBM Global Business Services designed and implemented the electronic file management system, starting in 2006, because IBM already had gained experience with workflow systems. For this purpose, the workflows of the DPMA were modelled in 60 processes – from “distribution of documents” to “patent examination” to “amendment of patent claims”. 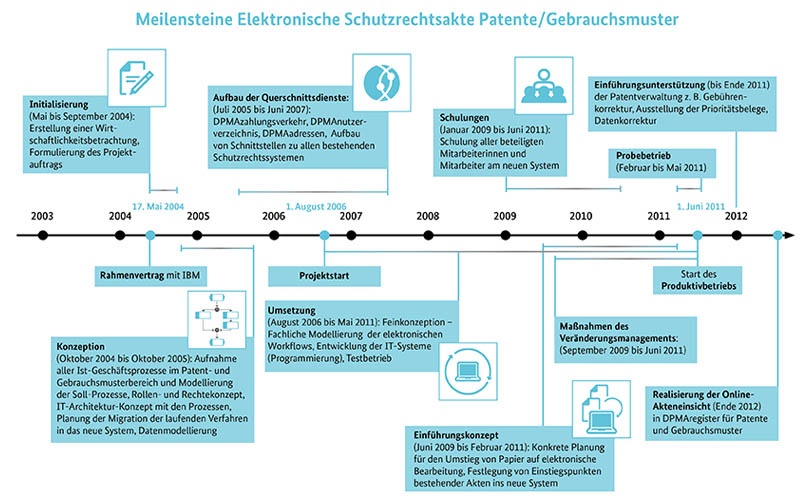 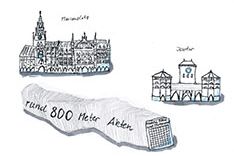 To be able to switch to electronic case files, we had to scan the previous paper files. On the one hand, these were files for which the patent examination procedure had not yet been completed. On the other hand, we had to keep files at least for the administrative procedures for which applications had been filed before the system was introduced but for which no examination request had yet been received. This sub-project started in September 2007. Its aim was to go live with the scanning of the existing case files in December 2008, so that it would be possible to have all existing case files that had not yet been closed available electronically before launching our electronic IP case file (DPMA patents/utility models) on 1 June 2011.

For this purpose, we first had to set up functioning scanning facilities that met high standards in terms of the quality of the scanned documents (OCR readability, colour fastness) and quantity (daily throughput of thousands of documents). In addition, it had to be “audit-proof”. This means that the filing of information had to be retrievable, traceable, unchangeable and tamper-proof. The solution was to introduce different “master” case files for the periods before and after the introduction of the system. Before the introduction of the system, the paper file was the master. For all IP case filed or processed at the DPMA after the introduction of the system, the electronic case file was the master. In order to implement this in an audit-proof manner, a new filing system had to be developed. It was decided to use the “chaotic filing” system: Documents submitted for certain file numbers are no longer assigned in paper format to this file, but are sorted by date with a cover sheet containing all the relevant data on the submitted documents. These are filed in batches. This system is anything but chaotic as it follows a stringent systematic approach.

From the Isartor to the Marienplatz

In total, 140,000 paper-based files were scanned; a file contains 56 pages on average, which adds up to 7,840,000 pages. One page measures about 0.1 mm; stacked on top of each other, the scanned pages measure about 800 metres – which is roughly the distance from the Isartor to the Marienplatz in Munich.

The fully electronic case file – this was not just about implementing complex technical processes. The working conditions for the staff changed fundamentally. For example, the newly created positions in the patent and utility model administration predominantly involved working on a screen all day. The “ElSA Personal” project supported all organisational and personnel measures to make the staff fit for their new tasks. From February 2011 to May 2011, 60 key users instructed a total of 1,000 colleagues on how to use the new system. 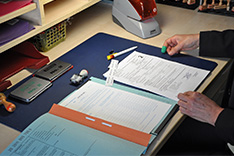 The last paper-based case file for a technical IP right was opened by the document receiving section on Friday, 29 April 2011, at 2 p.m. sharp. The following Monday, 2 May 2011, is considered “Day W” in the history of the DPMApatente/gebrauchsmuster electronic IP case file – as from that day, all new applications and any subsequently filed documents relating to them were kept only electronically. Until this date, patent and utility model documents were punched with the filing date. New applications were placed in prepared folders bearing the corresponding file numbers and forwarded to the “stock exchange” after they had been punched. A lift for files directly connected the document receiving section with the "stock exchange".

The "stock exchange" – how applications will find "their patent division" 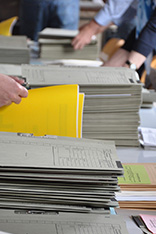 All incoming patent and utility model applications are assigned to a technical field according to the International Patent Classification (IPC). Before the introduction of the electronic case file, the “stock exchange” was held in a room of the Munich Atrium building: Every working day at nine o’clock, the staff members of the patent divisions in charge of rough classification took their seats according to a fixed seating plan. The stock exchange coordinator had taken the paper case files of the roughly 300 new patent and utility model applications received every day out of the lift coming from the document receiving section on the ground floor and, after a quick scan, laid them out in stacks on the tables so that they were within reach of four to six staff. The person who opened a file first had to grasp its main content in order to decide whether it was to be examined in their own division or passed on. If the application even covered a completely different technical field, the distribution of seats determined the place in the room where a member of the (presumably) competent division would sit. That way, difficult cases were discussed directly among the colleagues. After 30 to 45 minutes, the examiners in the stock exchange had marked all the incoming files of the day with their division numbers and left the room. Later, the in-house messenger service delivered the stacks of files to the patent divisions. In the times of the coronavirus pandemic, this procedure would be inconceivable due to the close face-to-face contact.

Today, the stock exchange is also completely digitised and takes place at the offices of the staff in charge of rough classification via work assignments and screen forms in the electronic case file. The stock exchange of those days was efficient, had its own character and, even today, some people still speak of it as a place of encounter. However, analogue paper-based case files are no longer in keeping with the times. So part of the success story of the electronic IP case file is that, in March of 2020, there was no need to think about a strategy for the stock exchange, which otherwise would have been necessary in order to cope with the current circumstances.

The great day: the introduction of electronic case file processing and the time afterwards 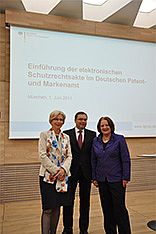 Of course, such a complex system did not run smoothly right away after the start. There were processes that did not yet work as intended, work lists with several hundred entries could not be processed. Fortunately, the staff working in patent administration was not alone: Patent examiners provided individual assistance with technical problems and questions, colleagues from other divisions of the office took over time-critical duties, such as the preparation of priority documents. In turn, examiners dealt with countless formal examinations and provided technical support for initial processing and data correction.

Further development of the systems by IT experts at the DPMA 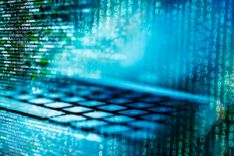 The IT systems of the DPMA do not constitute finished, static applications, but are subject to constant change. Hundreds of change requests are being submitted with respect to the electronic IP case file system every year, triggered by internal suggestions for improvement, by legal amendments or changes regarding international cooperation and by technical developments. Together with other corrections and minor amendments, these result in thousands of technical modifications. The complexity of the DPMApatente/gebrauchsmuster IP system is immense. More than five million lines of code (corresponding to about 120,000 closely printed pages of paper) have to be maintained and kept consistent, both technically and in terms of content.

Upon introduction of the electronic IP case file systems, we established a group of highly qualified IT specialists at the DPMA. Every day, they are busy maintaining and further developing the complex systems, assuring quality, implementing new versions and handling their operation and providing support for these systems. The strategy of providing support for these applications in-house has proved to be successful. This is also demonstrated by the example of the DPMApatente/gebrauchsmuster IP system, which operates very reliably. In 2018, the system had an availability of 99.8% during core working hours. An availability of the system of up to 99.8% during the core working hours means that the DPMA is at the same level as highly professional IT service providers.

Where does the "electronic IP case file" stand today?