There are few symbols that are known all over the world and are understood everywhere. The "peace sign" is one of them. The famous symbol was invented 64 years ago. These days you see it frequently again, because it has never been as necessary as it is today.

His creator is the British graphic artist Gerald Holtom (1914-1985). He invented the symbol on 21 February 1958 on behalf of the British Campaign for Nuclear Disarmament (CND), which is why it is also known as the CND symbol.

British peace activists planned a protest march from London to the nuclear weapons research centre in Aldermaston and wanted a symbol for it. On Good Friday 1958, the symbol was first seen in public on 500 round cardboard signs with handles ("lollipops") on Trafalgar Square. The CND thus established the tradition of the Easter marches - and the symbol became a "pictographic superstar" ("Spiegel").

Gerald Holtom, who had studied at the Royal College of Art in London, was a committed pacifist and conscientious objector during World War II. He deliberately refrained from having his design protected so that it could be freely used by everyone.

Demonstration against the invasion of Ukraine in Moscow, 24 February 2022

Holtom circulated various versions of what inspired him to create the sign: On the one hand, the symbol is said to have arisen from a combination of the representation of the letters "N" and "D" (for "Nuclear Disarmament") from the international flag semaphore (ironically, this system has a military origin and was mainly used in the navy). On the other hand, according to Holtom, it represents a stylized person with hands palm outstretched outwards and downwards helplessly and resignedly in the face of the nuclear threat. Holtom's sketches are now kept by Bradford University in the Commonweal Collection.

After his first appearance on the signs of the Easter march, buttons with the sign were soon produced. It quickly became an international symbol of the peace and anti-nuclear-weapons movement. American civil rights activists following Martin Luther King picked it up; the "1968ers" and hippies spread it. The sign finally became world famous because of the protests against the Vietnam War. 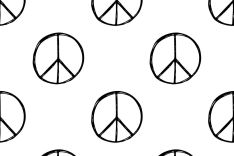 The fact that Holtom did not allow his design to be registered favoured the emergence of wild theories about the origin of the symbol. In certain ircles, for example, it is repeatedly claimed that the peace sign is actually the Germanic "death rune". In reality, however, this connotation dates back to the Nazi era: at that time, the historical Elhaz or Algiz rune (ᛉ) was reinterpreted as a "life rune". In the National Socialist era, it was then regarded as the "death rune" in inverted or fallen form (ᛦ) ; both variants were used, among other things, on gravestones of SS members to indicate the dates of birth and death. However, this has nothing to do with the various traditional historical rune alphabets: The meaning of ᛦ as "death rune" was only invented by esotericists at the beginning of the 20th century.

Today, practically all people know Holtom's sign. These days it is again much in use as a sign of hope for peace and protest against war.

The CND peace symbol can be found in the Unicode character set as U+262E? PEACE SYMBOL.