Two German Nobel Prize winners in one year - that hasn't happened for a long time. 2021 is an extremely successful year for science and research in Germany, according to the Academy in Stockholm. The two German laureates in the natural science disciplines are Klaus Hasselmann (physics) and Benjamin List (chemistry).

So there is something to celebrate for the often criticised science landscape in Germany when the Nobel Prizes are presented next week. Both German laureates are or were active under the umbrella of the Max Planck Society. The MPG can already look back on a proud 22 laureates from its ranks (if you count its predecessor institution, the "Kaiser Wilhelm Society", there are even 29 winners).

Climate researcher Klaus Hasselmann (89) was Director of the Max Planck Institute for Meteorology in Hamburg. Among other things, he developed a model of how short-term weather phenomena and long-term climate developments are connected. He showed why climate models can provide reliable predictions despite rapid weather fluctuations - and how humans influence the climate.

„Hidden patterns in the climate“ 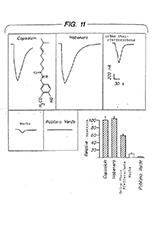 He has now been awarded the Nobel Prize in Physics “for groundbreaking contributions to our understanding of complex systems”. Hasselmann shares one half of the prize with Syukuro Manabe (Princeton) "for the physical modelling of the Earth's climate, quantifying variability and reliably predicting global warming”, according to the Academy. Hasselmann and Sanabe's work demonstrated the connection between the increase in CO2 concentration in the atmosphere and global warming.

The other half goes to Giorgio Parisi (University of Rome) “for the discovery of the interplay of disorder and fluctuations in physical systems from atomic to planetary scales.” The Academy recognised his "revolutionary contributions to the theory of disordered materials and random processes".

Last year, a Max Planck scientist had already been honoured with the highest scientific award in physics: Reinhard Genzel, Director at the Max Planck Institute for Extraterrestrial Physics in Garching, received the Nobel Prize together with Roger Penrose and Andrea Ghez for research on black holes. 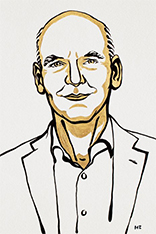 "Their tools revolutionised the construction of molecules," is how the Academy praises the two winners of the 2021 Nobel Prize in Chemistry. Benjamin List of the Max Planck Institute for Coal Research in Mülheim an der Ruhr shares the award with David W.C. MacMillan (Princeton) “for the development of asymmetric organocatalysis”. They have provided pharmaceutical research with "an ingenious tool for building molecules" and made chemistry greener, they say from Stockholm.

According to Max Planck President

Martin Stratmann, List has "opened a new chapter in catalysis research with great application potential". He had succeeded for the first time in developing organic catalysts with high stereoselectivity - "a breakthrough rarely seen." List's work was reflected in various patent applications, for example "Process for the organocatalytic transfer hydrogenation of imines" (dokument1>) or also

Benjamin List, born in 1968, comes from a family with a remarkable tradition in the natural sciences: the great chemist Jacob Volhard is his ancestor, Nobel Prize winner Christiane Nüsslein-Volhard his aunt.

In chemistry, too, the Max Planck Society thus provides a Nobel Prize winner for the second time in a row: in 2020, Emmanuelle Charpentier from the Max Planck Research Unit for the Science of Pathogens received the prize. 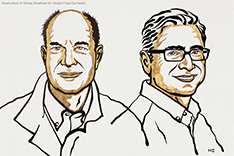 The Nobel Prize in Medicine goes to David Julius and Ardem Patapoutian (both working in California) "for their discoveries of receptors for temperature and touch.” They researched how nerve impulses are triggered to perceive temperature and pressure.
David Julius used capsaicin, a pungent compound from chilli peppers that causes a burning sensation, to identify a sensor in the nerve endings of the skin that responds to heat. His research also led to several patent applications, such as "Nucleic acid sequences encoding capsaicin receptors" (

Ardem Patapoutian used pressure-sensitive cells to discover a new class of sensors that respond to mechanical stimuli in the skin and internal organs. Patapoutian is (co-)author of patents such as "Mechanically-activated cation channels" (

Julius and Patapoutian's groundbreaking discoveries, according to the Nobel Academy, launched intense research activities leading to a rapid increase in our understanding of how our nervous system senses heat, cold, and mechanical stimuli. 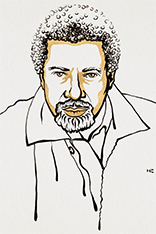 The Nobel Prize for Literature goes to Abdulrazak Gurnah “for his uncompromising and compassionate penetration of the effects of colonialism and the fate of the refugee in the gulf between cultures and continents.”

Only one woman among the 2021 laureates

Women continue to be strongly underrepresented in the Nobel Prizes: Among the total of 943 people who have received a Nobel Prize since 1901, only 58 have been women. This year there is only one female laureate, Maria Ressa, who shares the Nobel Peace Prize with Dmitry Andreyevich Muratov (“for their efforts to safeguard freedom of expression, which is a precondition for democracy and lasting peace”).

As last year, the Nobel Prizes are endowed with ten million Swedish kronor (about 980,000 euros) per category. The prestigious Nobel medals and diplomas are traditionally awarded in a ceremony on 10 December, the anniversary of the death of prize donor and dynamite inventor Alfred Nobel. This year, due to the pandemic, there will again be a "Nobel Week" with decentralised award ceremonies, some of which can be viewed via