On 10 December, the Nobel Prizes for 2019 will be awarded in Stockholm. There are two remarkable circumstances about this year's award ceremony: John B. Goodenough, who receives the chemistry award, is at the age of 97 the oldest Nobel Laureate there has ever been. In contrast, Esther Duflo - the only woman to receive a Nobel Prize for 2019 - is the youngest woman to receive the economics award.

Goodenough, who was born in Jena in 1922, shares the prize with Stanley Whittingham and Akira Yoshino. The Swedish Academy honours them for the development of the lithium-ion battery. This lightweight, rechargeable and powerful battery is used today in all areas from mobile phones and laptops to electric vehicles.

The road to the modern rechargeable battery 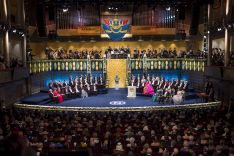 Stanley Whittingham laid the foundation for the lithium-ion battery during the oil crisis in the 1970s, when he discovered an extremely high-energy material while researching superconductors, from which he produced an innovative cathode in a lithium battery.
John Goodenough of Austin, Texas predicted that the cathode would have even more potential if it were made with a metal oxide instead of metal sulfide. After a systematic search, he showed in 1980 that cobalt oxide can generate up to four volts with intercalated lithium ions. This was an important breakthrough on the way to more powerful batteries.

On this basis, Akira Yoshino (Tokyo) developed the first commercially viable lithium-ion battery in 1985 - a lightweight, durable battery that can be recharged hundreds of times. These batteries have revolutionized our lives since they were first introduced to the market in 1991.

Inventive even in old age 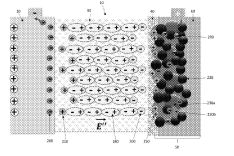 "Electrochemical cells with a high voltage cathode" (US10446845B2) by J.B Goodenough and others

US10446845B2 (1,51 MB) were registered by him most recently. In 2017 Goodenough introduced a concept for a new battery that replaces lithium with much cheaper, more readily available and environmentally friendly sodium. It should be more efficient, safer and cheaper lithium-ion batteries.

Earth's place in the cosmos

This year's Physics Prize winners will be honoured „for contributions to our understanding of the evolution of the universe and Earth’s place in the cosmos". One half goes to James Peebles (Princeton) "for theoretical discoveries in physical cosmology", the other half to Michel Mayor and Didier Queloz "for the discovery of an exoplanet orbiting a solar-type star.” Both work at the University of Geneva. 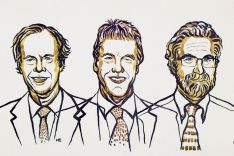 The Nobel Prize for Medicine goes to William G. Kaelin Jr, Sir Peter J. Ratcliffe and Gregg L. Semenza " for their discoveries of how cells sense and adapt to oxygen availability." The Nobel laureates identified molecular mechanisms that regulate the activity of genes in response to different oxygen levels. In this way, they recognised the mechanism for one of life's most important adaptation processes. They formed the basis for our understanding of how the oxygen content affects cell metabolism and physiological function. Their discoveries have also paved the way for promising new strategies to combat anaemia, cancer and many other diseases.

William G. Kaelin Jr. works at Harvard. His research is also reflected in patent literature; most recently he applied for

US8334137B2 (5,94 MB). The third in the group, Gregg L. Semenza from Baltimore, has also had his research work protected in various patents, for example in

The fight against poverty 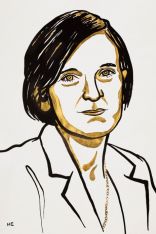 Esther Dullo, who together with her husband Abhijit Banerjee and Michael Kremer receives the prize in economics, is only the second female winner for 2019. The three are awarded "for their experimental approach to alleviating global poverty". Her research has "great potential to further improve the lives of the most impoverished people on the planet." according to the Academy. Dullo and Banerjee work at the Massachusetts Institute of Technology (MIT), Kremer in Harvvard.

The Peace Prize goes to Ethiopian Prime Minister Abiy Ahmed Ali ”for his efforts to achieve peace and international cooperation, and in particular for his decisive initiative to resolve the border conflict with neighbouring Eritrea”.

While the awarding of prizes in the natural sciences is rarely controversial, the Academy's decisions in the literature category often give rise to discussion. The fact that Olga Tokarczuk will subsequently receive the prize for 2018 only disturbs some ultraconservatives in their Polish homeland. But the award of the Nobel Prize for Literature for 2019 to Peter Handke ("for an influential work that with linguistic ingenuity has explored the periphery and the specificity of human experience“) is sometimes heavily criticized for political reasons.

However, one thing is certainly worthy of criticism about the Academy's award policy: the proportion of women among all prize winners since 1901 is exactly 5.7%.