AI and intellectual property rights: How can future technology be protected?

"Artificial intelligence - effects and challenges in the patent system": Conference at the DPMA

Experts from various sectors spoke at the DPMA about artificial intelligence (AI) and its protection. Two questions ran like a red thread through the conference with around 130 participants: How can AI be protected? And: If AI itself generates inventions, can they be protected at all?

The symposium, which was organised by Bayern Innovativ GmbH, took place on 7 November at the DPMA Forum. More than half of the participants came from various sectors of industry such as automotive and suppliers, energy, materials, medical technology as well as electronics and IT. 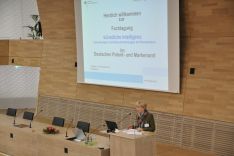 AI is more than just a technology trend: "This is not simply a matter of the further technical development of existing systems, but of a key technology which brings about a comprehensive transformation process", said DPMA president Cornelia Rudloff-Schäffer in her welcoming address to the participants.

The dynamics of the future will lead to social changes and raise new legal, social and ethical questions for our everyday lives: "Many people are already asking themselves today: Will my job be secure in the future? Or will it be replaced by a self-learning machine based on algorithms?”

President Cornelia Rudloff-Schäffer on the use of AI at the DPMA:

"The application of artificial, i.e. machine intelligence in its current form - namely the combination of knowledge-based data systems with learning systems - will help us to further improve and optimise the search processes of examiners.
Pilot projects within the framework of our "New Search" project are currently underway at the DPMA. We want to significantly develop file and patent search into a reliable assistance service for patent examination.
This is the only way to cope with the sheer flood of 3 million patent applications per year worldwide and as many scientific publications in English alone - the so-called “state of the art” - in search and examination". 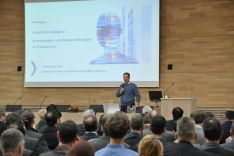 Does AI question the whole patent system - or is it just another new technology? This was the question with which the series of exciting presentations began. Dr. Sven Hetmank from the Institute of Intellectual Property at the TU Dresden opened the conference with one of the main questions: Are AI-generated inventions patentable?

Hetmank stated that patent law does not require any human contribution (unlike copyright law, for example). How the invention came about is legally irrelevant; only the objective result counts, not the way to it.

According to Hetmank, if AI-generated inventions were patentable, there would be a danger that competition would concentrate too much: "Large, rich companies could literally plaster patents on the market. There would no longer be a transfer of knowledge.”

On the other hand, patents on AI results could be an important incentive to continue investing in AI and their publication would enhance the state of the art. However, if a company protects its AI-generated inventions by keeping them secret, the technology state of the art remains the same for all others. 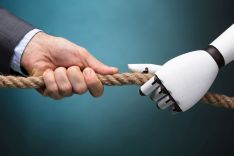 Currently, only natural persons can be registered as inventors. An AI that also applies for a patent for its own inventions is probably still very far way in the future. What is still needed is an inventor who uses the AI as a tool, recognizes the results as an invention, determines their commercial usability and applies for protection.

According to Hetmank, the requirements for inventive steps will probably continue to increase. On the one hand, it will become more and more difficult to keep up with the state of the art and to determine it - on the other hand, however, the AI will be able to help with this.

Thomas L. Lederer also emphasized in his lecture that AI will become an important research aid. The patent attorney of Boehmert & Boehmert gave "Practical advice on the patenting of inventions in the field of AI". According to Lederer, the guidelines are very comparable to those for computer-implemented innovations (CII).

He distinguished three applications for AI: The basic applications which are rather not patentable, but those from the areas of "training/learning" and "use as a tool". A "second technical hurdle" has to be overcome in order to be patentable, for example in the form of proof of a technical effect or in the training of a neural network. Lederer presented the current practice on the basis of some examples. 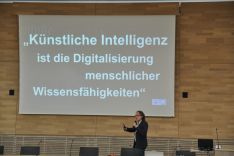 "AI is more dangerous than nukes", according to Elon Musk. Reinhard Karger, speaker of the German Research Center for Artificial Intelligence in Saarbrücken, pointed out "Moral Perspectives and Guardrails" for AI in his presentation, but at the same time warned against exaggerated fears à la Musk. AI is "the digitalization of human knowledge capabilities," he defined - and a billion-dollar market, not least with regard to the potential for use in the field of social media.

He cited some interesting examples of the use of AI, such as shark recognition drones on Australian beaches. Karger did not leave unmentioned that such drones would also be suitable as a perfect surveillance tools - which once again shows that AI could indeed darken our future quite a bit.

Other examples of AI mentioned by Karger included speech analysis programs for early dementia detection and a system that optically monitors self-contained machines and automatically slows them down when a person approaches to reduce the risk of an accident.

"Robot will be able to do everything better than us" - another Musk quote that Karger vigorously contradicted: "We can do more!"

Uwe Herrmann from the DPMA reported on the examiner's practice. In his presentation "Internet of Things - computer-implemented inventions", he explained the current state of the art of patentability of AI on the basis of law and court rulings.

Hermann explained the "three-step approach" followed by the DPMA in the examination of patentability: Is the subject of the invention at least partly technical? Does the patent claim contain instructions which serve to solve a concrete technical problem by technical means at least in partial aspects? And: Is the claimed subject matter considered new and inventive in relation to the state of the art?

In order for a CII to become patentable, the BGH case-law states that "the claimed teaching must contain instructions which serve to solve a practical technical problem by technical means". However, it is sufficient for a partial aspect of the protected teaching to overcome a technical problem ( 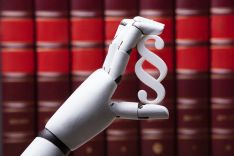 The second patent examiner to speak was Miguel Domingo Veccioni, Team Manager at the European Patent Office. According to Veccioni, the proportion of computer-implemented inventions there rose rapidly between 1998 and 2014, especially in the automotive (from 36 to 63 %) and medical technology (from 31 to 49 %) sectors. He also gave insights into practice and cited revealing examples.

Only a few days ago, the European Patent Office published its new

guidelines , which are also relevant for the topic of the conference

Dr. Hendrik Brakemeier from UnternehmerTUM GmbH in Garching wants to promote the use of AI: In his presentation, he introduced the "aplliedIA - Initiative for applied artifical intelligence".

Machine learning means searching for and recognizing the logic behind data records. This "deep learning" of artificial neural networks is ultimately nothing more than a complex mathematical function. But the value of the data now increases enormously, because the AI draws its logic from it: "The learning data are decisive for the benefit of the AI". According to Brakemeier, the scientists involved spend 60 percent of their working time organizing and preparing the data for learning. 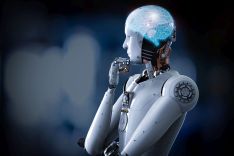 Brakemeier emphasized the importance of the "culture of openness" in the worldwide research community. Top AI researchers attache great importance to being able to communicate their results (eg.on

Google AI) in order to promote scientific exchange and profit from it themselves. Today, companies have no choice but to support this transparency, said Brakemeier, as otherwise the highly sought-after top researchers would simply quit and join the competition. Even Apple, which has been extremely discreet up to now, now publishes parts of its research on AI.

When setting up the network architecture for deep learning, researchers would be well advised to use on existing open-source models; there is no need to “reinvent the wheel”, says Brakemeier. However, the algorithm for machine learning must then be implemented in a tailor-made way and optimized for the data set using "hyperparameter tuning". A fully trained neural network cannot be reprogrammed without its training data. According to Brakemeier, patent claims and training data may be closely linked. The question remains: If the algorithm extracts the logic behind the data, then who is the inventor? 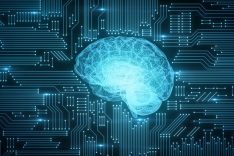 Jaroslav Blaha, CEO of CellmatiQ GmbH, presented the company´s medical imaging tools. This means that "a lot of money can be raised" (says Blaha), but they are particularly interesting for technical and health aspects. The programs developed by the company should be able to carry out complex image analyses far beyond human capabilities. They could, for example, analyse X-ray images and thus support doctors in their diagnostic work. "Our AI can automatically detect and classify structural patterns - much faster, more accurately and more objectively than humans," says Blaha.

This already works in the field of orthodontics ("cephalometric analysis") and caries detection, but also in glaucoma diagnosis or the age determination of test persons.

Blaha speaks of his company's technology as a "convolutional neural network" with around 100 million artificial neurons (equivalent to about 10 percent of the human brain). The most important prerequisite for the function of this AI is again extensive diagnostic data. If the company can continue to expand its data treasure, there will certainly be a lot more to be heard from them...

Blaha concluded his lecture with fascinating examples from the "front line" of AI research - such as how scientists from Radbound University Nijmwegen manage to "tap" the neuronal image representation in the brain and make it visible externally.

"Everything must remain explainable!" 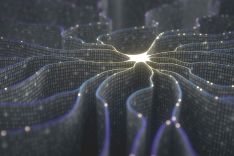 Matthias Schneider from Audi spoke about one of the best-known and most discussed applications of AI, autonomous driving. This topic raises not only many technical, but also legal and ethical questions (the DPMA already dedicates a dossier to this topic here).

The threat of a loss of control in the face of continuously self-improving artificial intelligence worries him: According to Schneider, AI could improve engineering performance, but no "black box" should be created: AI-generated programs must be comprehensible to humans, "everything must remain explainable!”

He sees the existing possibilities for the protection of AI as "expandable". A patenting of AI-generated inventions, however, requires a careful consideration of the possible consequences. Self-generating AI patents hold the danger of monopolisation and would therefore be counterproductive, Schneider said. He cites Google's "de facto monopoly" as an example.

Schneider expressed the fact that there is still a long way to go before perfect, fully autonomous driving can be achieved with the following, certainly debatable slogan: "It is easier to replace a patent examiner with a program than to have a car driven by AI".

Finally, Dr. Mike Shellabear presented KI's additive manufacturing applications in his company, EOS Gmbh. The company specializes in fully automated production processes with high-performance 3D printers. These promise a "massive cost reduction" in manufacturing, as it advances much faster thanks to AI-supported technology and reduces the number of elements for complex parts to a single component.

It became particularly clear from the presentations on corporate practice that some of the applications of AI are already well advanced, but that their protection by patents is still in the initial stages. In order to clarify the questions raised, further intensive discussion and interpretation of the current legal situation by further judgments of the courts are necessary.