Sharp increase in innovations in e-mobility and autonomous driving

Large share of German manufacturers in patent applications on the German market – DPMA President: figures are cause for optimism – strong competition from Asia and the US – uncertainty due to the coronavirus pandemic 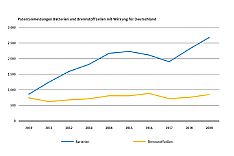 Munich. Since the emissions scandal surrounding the automotive industry in late 2015, innovation in electric mobility in Germany has accelerated significantly. In 2019 the German Patent and Trade Mark Office (DPMA) and the European Patent Office (EPO) published 660 patent applications effective in Germany that relate directly to electric vehicles – a 42% increase on 2017. Innovation in key technologies for powering electric vehicles – batteries and fuel cells – has gone up considerably too: As for battery technology there were 2,684 published applications, representing a 41% increase on 2017. As for fuel cells there were 848 published applications in the same period – an increase by 18%. As a rule, patent applications are published 18 months after they have been filed; that is, it takes one and a half years for statistics to show them as published. "How dynamically applications concerning electric mobility and related key technologies develop is impressive," said DPMA President Cornelia Rudloff-Schäffer. "Electric mobility has obviously become more important for manufacturers in the past years." She added that the figures suggested that, after the emissions scandal in 2015, carmakers had shifted development resources from the internal combustion engine to the new drive technologies. Last year the number of applications concerning the internal combustion engine was 13% lower than in 2017.

In the long term, too, there is a clear upward trend, as there were more than three times as many published patent applications concerning electric drive and battery technology in 2019 than ten years earlier. As for fuel cells, the overall long-term trend is also positive, with occasional fluctuations up and down. However, the numbers suggest that most manufacturers currently prefer batteries over fuel cells when it comes to e-mobility. Applications concerning the internal combustion engine, however, decrease slightly even in the long term.

In these technologies, German manufacturers largely dominate the innovation landscape in the German market. Last year almost half of all patent applications concerning electric drive came from Germany (47.4%), followed by Japan (17.0%), the US (13.6%), China (4.7%) and the Republic of Korea (3.6%). The manufacturer ranking was led by the German company Audi AG. Ranking second and third were the Japanese company Toyota Jidosha K.K. and the American company Ford Global Technologies, LLC. Bayerische Motoren Werke AG and Robert Bosch GmbH, another two German applicants, came fourth and fifth.

With respect to the battery technology, too, applicants from Germany, accounting for almost one third of all applications (29.7%), came first, again followed by Japan (21.4%), the Republic of Korea (20.2%), the US (12.0%) and China (8.7%). The company ranking, however, was led by the Korean company LG Chem, Ltd., followed by Bosch and BMW, which came second and third.

With respect to the fuel cell technology, applicants from Germany came only second (29.8%). The ranking was led by Japan, accounting for more than one third of all applications (37.9%). The United States (13.1%), the Republic of Korea (7.5%) and France (4.2%) came third to fifth. The top ranking of manufacturers was led by Toyota, followed by Audi and Bosch.

With respect to the applications concerning the internal combustion engine, however, applicants from Germany had a big lead (43.8%), followed by Japan (21.1%), the US (18.4%), the Republic of Korea (3.0%) and France (2.4%). Consequently, a German company also led the manufacturer ranking: Robert Bosch GmbH. Ranking next were Ford and Schaeffler Technologies AG & Co. KG.

Germany and the United States lead the autonomous driving industry

In addition to the drive technologies the DPMA took a look at innovations in what is known as autonomous driving. Autonomous driving includes not only the automated performance of part or all of the dynamic driving tasks (driverless driving) but also systems and processes to support the driver in controlling the vehicle or to perform subtasks. The numbers of related applications have soared in the past years as well: In 2010 the DPMA and the EPO published 1,180 patent applications effective in Germany in the technology classes attributed to autonomous driving. Last year, there were 4,265 published patent applications – more than three and a half times as many.

The great majority of applications in 2019 (43.0%) were filed by German companies also in this area. With Bosch (1st), BMW (3rd) and Daimler AG (4th), three German manufacturers were in the top ranks. With a share of 20.1% of the applications, the United States came second, with two American companies, Ford and GM Global Technology Operations LLC, completing the top five of the ranking of applicants. It should be noted that there is neither a generally accepted definition nor a specific technology class to attribute patent documents to autonomous driving. As a result, it is not possible to make a sharp distinction from other fields of technology.

DPMA President: The race for technology leadership is on

"The fact that, on the German market, German manufacturers lead the patent application ranking in many areas makes me feel optimistic about the future. Nonetheless, the numbers also show that there are serious rivals, especially in Asia and the United States, that compete for technology leadership and also try to capture this new market," said Cornelia Rudloff-Schäffer. "The automotive market is undergoing drastic changes and there is a race for gaining the market leadership in the future key technologies," the DPMA President added. "The question as to who will win this race is open – especially because it is currently unforeseeable how the coronavirus pandemic will impact the economic development and thus innovations."

Inventiveness and creativity need effective protection. The DPMA is the German centre of expertise for all intellectual property rights – patents, utility models, trade marks and designs. As the largest national patent office in Europe and the fifth largest national patent office in the world, our office stands for the future of Germany as a country of inventors in a globalised economy. Its staff of just under 2,800 at three locations – Munich, Jena and Berlin – provide services for inventors and companies. They implement federal innovation strategies and develop the national, European and international protection systems further.