Inventions for a green future

To celebrate World Intellectual Property Day, the German Patent and Trade Mark Office looks at renewable energy – DPMA president: key technologies for the future of our economy and society 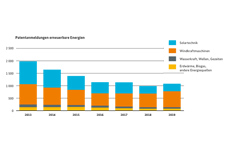 Here you will find the

Last year saw a significant increase in the number of published patent applications concerning renewable energy with effect in Germany for the first time after several years of falling numbers. In 2019 the DPMA and the European Patent Office (EPO) published 1,077 applications concerning solar technology (solar heat and photovoltaics), wind generators, hydro power as well as geothermal energy and biogas technology, representing an increase of 9.6% from the previous year. “The different methods to use renewable energy are absolute key technologies for a sustainable conversion of many industries and for the fight against climate change. It is good news – not only for environmental protection – that innovation in this area is back on the rise,” said DPMA President Cornelia Rudloff-Schäffer. As a rule, patent applications are published 18 months after having been filed, as required by law.

The latest increase of published applications effective in Germany is based primarily on a significant 16.6% increase for wind generators. Applications in the fields of solar technology, geothermal energy and biogas were up by a razor-thin margin, while the number of applications concerning hydro power was exactly the same as in the previous year. The number of non-wind power patent applications filed by companies and independent inventors from Germany, however, was on the decline in 2019.

In the long term the 2019 numbers are significantly below those six years earlier. In 2013 the DPMA and the EPO published as many as 1,977 renewable energy patent applications containing innovative developments with effect in Germany. Last year they published 900 fewer applications (-45.5%). Especially striking is the decrease of solar technology-related applications: the number of applications published last year (304) was only a third of the 919 applications published six years earlier. This decrease could be due to a less favourable economic and political environment compared to previous years. In some fields of renewable energy such as wind power and hydro power, however, the technology seems to be so mature that most new applications contain only minor developments of existing technologies.

The general trend of the application numbers of renewable energy largely corresponds to the development of the international applications with WIPO (PCT applications), as the

applications filed with the World Intellectual Property Organization in the related fields of technology in 2019 were also down 18% compared to 2013.

Inventiveness and creativity need effective protection. The DPMA is the German centre of expertise for all intellectual property rights – patents, utility models, trade marks and designs. As the largest national patent office in Europe and the fifth largest national patent office in the world, our office stands for the future of Germany as a country of inventors in a globalised economy. Its staff of just under 2,800 at three locations – Munich, Jena and Berlin – provide services for inventors and companies. They implement federal innovation strategies and develop the national, European and international protection systems further.