Federal Minister of Justice: “Maintain and extend the competences of the DPMA”

On his inaugural visit, the Federal Minister of Justice, Dr Marco Buschmann, praised the German Patent and Trade Mark Office as an “important pillar” of the federal government – DPMA President pleased about the “clear recognition of the great importance of national IP rights” 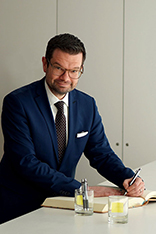 The Federal Minister of Justice, Dr Marco Buschmann, signs in at the DPMA guest book

Munich. The Federal Minister of Justice, Dr Marco Buschmann, emphasised the great importance of the German Patent and Trade Mark Office (DPMA) for the federal government’s work. “The federal government wants to maintain and extend the undisputed competence of the DPMA,” the minister said on the occasion of his inaugural visit to the DPMA in Munich, adding that, like industry, he also appreciated the expertise and commitment of the numerous examiners. Dr Buschmann said that the DPMA and its staff were an “important pillar” of the federal government’s work – in particular where the protection of new technological and scientific innovations was concerned and, of course, where input from the daily work at the DPMA was needed to further improve patent, utility model, trade mark and design laws in the years to come. Federal Minister Dr Buschmann was accompanied on his visit by Parliamentary State Secretary Benjamin Strasser and State Secretary Dr Angelika Schlunck.

DPMA President Cornelia Rudloff-Schäffer appreciated the visit and the corresponding recognition. “We are thankful for the support of our work and pleased about the clear recognition of the great importance of national IP rights for the success of Germany as a centre of commerce and industry,” said the DPMA President. The Federal Minister of Justice also emphasised the extended competences of the DPMA, provided for by the new section 26a of the Patent Act. He argued that the responsibility for informing the public about IP rights and their exercise and enforcement and for international administrative cooperation, set by law for the first time, was an “important task”. The DPMA, he added, was thus able to substantially contribute to the fight against product piracy. Dr Buschmann stated that product piracy caused substantial economic damage and threatened public health and safety – for example if drugs and COVID-19 protective masks were counterfeited or toxic textile fabrics were put on the market. “These examples show that the DPMA has been entrusted with highly important tasks and thus provides the federal government with tremendous support,” the minister emphasised.

On the federal minister’s visit, the heads of the Directorates General of the DPMA informed the delegation about the current developments in the IP procedures for patents, utility models, trade marks and designs and about the strategic challenges of the years to come. Furthermore, DPMA President Rudloff-Schäffer asked the minister and the administration of the Federal Ministry of Justice to support the implementation of important future-oriented projects of the DPMA.