Open Day of the Federal Government in Berlin: information stand of the German Patent and Trade Mark Office 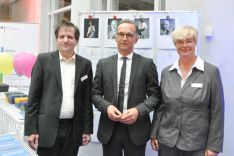 Berlin/Munich. This year too, the German Patent and Trade Mark Office (DPMA) participated in the Open Day of the Federal Government. On 26 and 27 August 2017, the Federal Chancellery, the Federal Press Office and all 14 federal ministries opened their gates to visitors for the 19th time and offered interesting insights. Those who wanted to see the office buildings from inside, obtain first-hand information or simply wanted to indulge in a day of entertainment - there was something for everyone.

About 3,500 visitors used the open doors at the Federal Ministry of Justice and Consumer Protection. Our stand offered a colourful mixture of information on IP issues and a diverting entertainment programme. That way, children and adults were individually given a better understanding of patents and other IP rights.

Federal Minister Heiko Maas together with Ernie and Bert from Sesame Street answered questions to young and old. He was pleased "that so many followed the invitation to attend the Open Day of the Federal Government. Many of the activities of the authorities subordinate to the Federal Ministry of Justice and Consumer Protection affect citizens in a very practical way. The DPMA makes this clear by offering a varied and inventive Open Day programme every year." In addition to exciting discussions on instructive topics, there was an entertaining show with comedy and live music. Those interested in history had the opportunity to join a guided tour of the exhibition "Die Rosenburg" or take a ride with an XXL Trabi limousine through the city centre of Berlin.

Inventiveness and creativity need effective protection. The DPMA is the German centre of expertise for all intellectual property rights - for patents, utility models, trade marks and registered designs. As the largest national patent office in Europe and the fifth largest national patent office in the world, it is committed to Germany's future as a country of inventors in a globalised economy. Its more than 2,500 staff based at three locations - Munich, Jena and Berlin - are service providers for inventors and companies. They implement the innovation strategies of the Federal administration and develop national, European and international IP systems further.