Cooperation with the State Intellectual Property Office in China 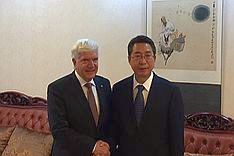 TThe State Intellectual Property Office of the People's Republic of China (SIPO) and the German Patent and Trade Mark Office (DPMA) have been successfully cooperating for 35 years. The two institutions are now working together on various projects, such as the Patent Prosecution Highway for accelerated examination of patent applications. From 16 to 20 October, a DPMA delegation visited the SIPO in Bejing and Shanghai. The main topics to be discussed were further cooperation between the offices and the challenges of the future in the context of digitisation and Industry 4.0. 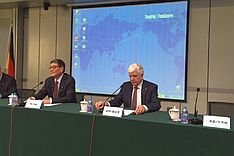 The first day of the business trip began with the first highlight - the meeting at senior management level between the State Intellectual Property Office of the People's Republic of China (SIPO) and the German Patent and Trade Mark Office (DPMA). The German delegation, led by DPMA Vice-President Günther Schmitz, was warmly received in Beijing.

The discussions focus on further cooperation between the offices and the challenges of the future. Digitisation and Industry 4.0 are also important topics in China, affecting applicants and patent institutions alike.

On the same day a workshop on this topic took place, opened by He Hua, Vice-President of SIPO, and DPMA Vice-President Günther Schmitz. Chinese and German patent examiners reported on their experience with applications from the "Industry 4.0" sector and shared views on the challenges associated with this new development.

After the friendly welcome there was an exchange of gifts, as is customary in China. SIPO Commissioner Dr Shen Changyu received a fine porcelain beer stein featuring patterns from the Neuschwanstein castle – as a reminder of his visit to the castle in 2014, organized by the DPMA.

Tuesday, Oct 17th - Visit to the training centre and the German Embassy 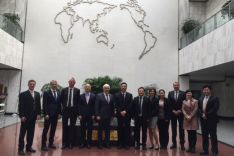 Around 1,000 new junior examiners per year - how does SIPO manage to train so many highly qualified specialists within such a short time? On the second day of their visit to China, the German delegation gained an insight into the large SIPO training centre in Beijing. All courses and measures necessary for examiner training take place here. 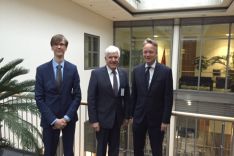 In the afternoon, a visit to the German Embassy in Beijing took place. The DPMA delegation held talks with the ambassador Dr Rückert. The talks were about one of the most important questions for many German companies: How can intellectual property protection be enforced in China? The insights gained at SIPO on Monday are of great value here, and the challenges also become clear.
These aspects make it clear once again how important German-Chinese cooperation in the field of industrial property protection has been for decades. 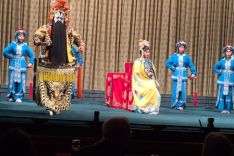 After a long day´s work, the delegation went to see the famous Beijing Opera in the evening. 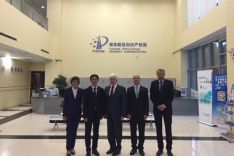 On Wednesday, the delegation continued its visit to Shanghai, a metropolis with 23 million inhabitants. Right after landing, Vice President Schmitz met Mr. He Ying, Director of the Shanghai Pudong New Area IP Center. The latter informed the DPMA delegation about the office founded in 2016 and its extremely impressive project. Key technologies in the Pudong region are to be promoted through IP consulting and investment. “This office is another mosaic piece in China's IP strategy," said Vice President Schmitz. 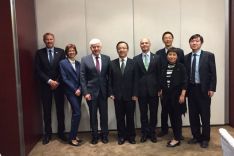 A meeting was then held with Mr. Rui Wen Biao, Deputy Director General of the Shanghai Municipal Administration of IP. At a joint dinner, the participants were informed about the latest developments in the field of intellectual property protection in their countries. Mr. Rui expressed his appreciation of the German IP system, which he got to know during a one-month stay in Munich.
Later in the evening, a spontaneous invitation was issued by Mr. Hong Yongqing, whom Vice-President Schmitz had met at the Shanghai IP Forum 2012. 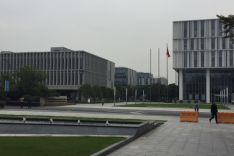 On Thursday the delegation went on to Suzhou. This city with over a million inhabitants in the northeast of Shanghai is an important business location in China. Companies such as Bosch, Apple and Schott AG have located parts of their production facilities here. Reason enough for the PRC Intellectual Property Office (SIPO) to open a local branch here. Due to the size and the high population of China, additional SIPO offices will be opened outside Beijing. 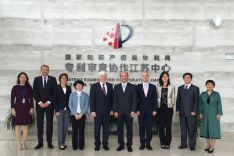 Director Chen Wei and the DPMA delegation at PECC Souzhou

After a two-hour drive, the delegation arrived at the Patent Examination Cooperation Center (PECC) of the Jiangsu region and was received by Director Chen Wei. These PECCs are local patent examination offices in all technical fields of the SIPO. More than 1600 patent examiners work here, 70 percent of whom are female! During a tour of the modern and spacious facility, the DPMA delegation was also able to visit the examiner's rooms. "I am very impressed by the speed with which the Chinese IP strategy is being implemented," said Vice President Schmitz afterwards. 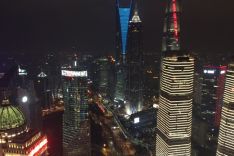 After the return journey, the delegation visited the Oriental Pearl Tower in Shanghai and was impressed by the sea of lights in this megacity. All of them showed courage during the Skywalk at an altitude of 259 meters.

This Friday, the last day of the trip, the DPMA delegation was visiting the German Consulate in Shanghai. Talks with the Deputy Consul General, Claudia Spahl, and industry representatives took place. After that, the Consulate invited the deleggation for lunch.

The visit to China was again instructive and interesting. The DPMA delegation was impressed by the efforts undertaken by the Chinese partner Office.

“China and Germany - SIPO and the DPMA - will continue to work together as partners in the field of industrial property protection. We look forward to further joint projects and challenges. Industry 4.0 is just one of many forward-thinking topics that play a role in our cooperatione“, Vice-President Schmitz summed up shortly before the return flight to Munich.