International registration of the word/figurative mark 373128

By Toutatis! A real European cultural asset celebrates its 60th birthday, and the whole of Gaul is celebrating. The whole of Gaul? Yes, indeed! With special coins, stamps, exhibitions and everything that it involves.

On the death of Albert Uderzo

The legendary illustrator Albert Uderzo died on 24 March 2020 at the age of 92. Together with René Goscinny he was the father of "Asterix" and many other comic figures. Uderzo, who was born on April 25, 1927 as the son of Italian immigrants near Reims, had a lasting influence on generations of cartoonists and comic artists. Until his old age, he remained at the height of his craftsmanship. Not only the millions of "Asterix" fans worldwide will miss him painfully.

On 29 October 1959, Asterix the Gaul had his very first appearance in the pilot edition of the French youth magazine “Pilote”. With this opening series of the adventures of the magic potion-guzzling and winged helmet-wearing Gaul, a remarkable success story began: 380 million volumes of the comic series have so far been sold worldwide; they have appeared in 80 countries and 111 languages and dialects. In addition, eight animated cartoons, two computer-animated films and four live-action films have been shown in cinemas so far.

Just in time for the 60th birthday, the 38th volume of the series, “Asterix and the Chieftain’s Daughter” with a first international edition of five million copies was published a few days ago. In Germany alone, 1.6 million of these copies will come onto the market. Germany seems to be the home of the most loyal fans of the Gauls with the indomitable spirit, because about a third of all Asterix volumes ever sold went over the counter in Germany. There are also dialect versions of the adventures in a total of 29 different German dialects! These Goths are crazy!

Big hit with the “Goths” 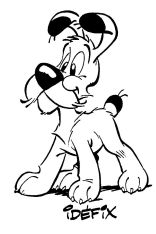 Please don’t pull out any trees when he is around: Dogmatix/Idefix (European Union trade mark 000683540)

That Asterix was to become even more popular here than in his home country, where he is part of the national cultural heritage, was initially not foreseeable. The first German licensee (“Fix-und-Foxi”-maker Rolf Kauka) had to give the licence back because of gross distortion of the original. And while the stories of the title hero’s typical journeys to other nations are amiably and ironically playing with national stereotypes, the Germans in “Asterix and the Goths” are all portrayed very badly: They all wear spiked helmets, are mean, devious; they all secretly want to become “leader” and attack their neighbouring countries. The memory of German aggressiveness was still very much alive in France in 1963. It is all the more remarkable that the German comic book friends didn't resent the authors of Asterix for this little nastiness and became deeply fond of the cartoon Gauls. Possibly, the Germans do have more humour than generally assumed …

The sky has not yet fallen on his head

At 60, Asterix is a youngster compared to Micky Maus, Donald Duck or Tintin and Snowy, but still a classic. On occasion of the anniversary, let’s take a quick look at the technology of Asterix. The series contains some interesting inventions. The best-known is of course the magic potion of the druid Getafix (Miraculix in German – 1022703), which gives superhuman strength. Although cooking recipes as such are not patentable, a strengthening agent with such a dramatic effect would undoubtedly be eligible for patent protection.

Probably, another recipe would also be quite successful on the market: Asterix’s infernal stew from “Asterix and the Laurel Wreath”, which immediately cures even the worst hangover. The main ingredients: an unplucked hen, black pudding, soap and very many chilli peppers. Side effects: multistage facial change of colour similar to an Andy Warhol series portrait, hot flushes and greatly increased salivation. 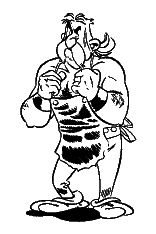 Fulliautomatix, smith and music critic of the village (425270)

Certainly, our examiners would also like to have a look at the application for the statue pedestal of the agent Dubbleosix, which turns into a chariot at the push of a button (from “Asterix and the Black Gold“). By the way, Dubbleosix with the facial features of actor Sean Connery is an homage to James Bond. “Cameo appearances” of this kind are characteristic of the series. The actors Jean Gabin and Bernard Blier were immortalized in the same volume. In other adventures, secondary characters resemble Kirk Douglas, Arnold Schwarzenegger, Vincent Cassel, Lino Ventura, Stan Laurel & Oliver Hardy and many other celebrities.

But let’s get back to the inventions: Undoubtedly, the manipulated acorns used by Getafix to regrow felled trees in a matter of seconds are every nature lover’s dream (“The Mansions of the Gods”). The flying carpet from “Asterix and the Magic Carpet” would also be a big seller. 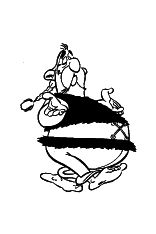 Asterix can also teach you a lot about marketing: In “Obelix and Co.” it is inspiring to see how the snooty elite business university graduate Preposterus (by the way, a parody of the young Jacques Chirac) turns a rather clumsy accessory like the menhir into a bestseller. By contrast, Unhygienix the fishmonger, who is proud to procure his goods “from renowned wholesalers” in Marseille, hundreds of kilometres away, and has them delivered by ox cart, should urgently review his distribution channel. 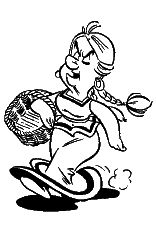 Needless to say, the authors and the publisher have not forgotten to protect their wild boar-loving and pugnacious rascals well: Not only the names of the eponymous heroes Asterix and Obelix are protected, but also the names of secondary characters such as Cacofonix (Troubadix in German – 1068120), Justforkix (Grautvornix in German – 305077236) or the luckless Bravura (Maestria in German – 2052555) are or were registered word marks.

Fortunately, there is no end in sight to the success story: Although the “classical” period of the unrivalled first 23 volumes came to an end in 1977 with the sudden death of the ingenious writer René Goscinny, Albert Uderzo continued on his own – with fluctuating quality of content (not of illustration!). Surprisingly, a few years ago, he handed over to Didier Conrad and Jean-Yves Ferri, who have now published their fourth adventure with “Asterix and the Chieftain’s daughter”. Hopefully many more will follow, by Belenos!